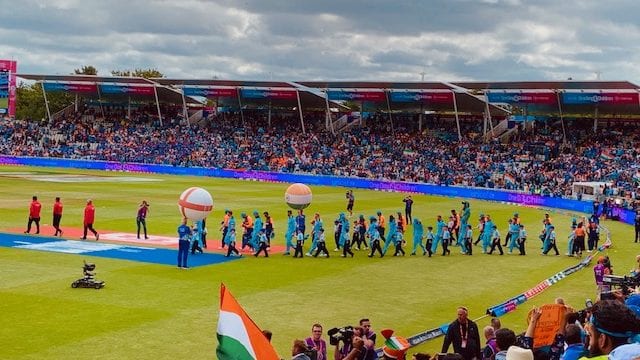 And as all Cricket fans would agree, the morning of a match featuring your home country brings about huge excitement. And if it’s a World cup match, the excitement doubles. What’s more, if you are one of those lucky ones who has a ticket to watch the game live at the stadium, the ‘game-day morning’ experience becomes priceless. The drive from London and subsequently the entry into the stadium to watch India v England at Edgbaston was that experience for me.

Moments that stood out

The scoreboard read – 13.4 overs, 47/1, M. Wood to V. Kohli. What happened next ball will remain fresh in my memory for a long time – an imperious cover drive piercing the off-side field, and beating the sweeper fieldsman comfortably. No one inside the circle moved. Comparisons with Sachin Tendulkar’s straight on-drive immediately made for interesting conversations. The subtle movement of the feet to get in position, the steady head, the disdain with which the ball was hit and ultimately the speed with which the ball raced to the fence – all made for spectacular viewing.

After a pretty cautious start, with only 28 off the first 10 overs, that’s exactly what the Indian innings needed to move forward. The cover drive from the best batsman in the world was hit with so much arrogance and authority that the slow start was almost forgotten and 338 suddenly felt like no big deal.

To watch Jadeja run around the field is in itself a big, massive treat. The way he gets into his stride, takes off, accelerates, collects and throws the ball is a sight to behold. But to watch this live and especially when he is just a stone’s throw away from you is a totally different matter altogether. His catch to dismiss Jason Roy was just a big bonus.

Jadeja’s poise, physique, athleticism and of course his stats of catches taken and runs saved make him, in my opinion, the best fielder in world cricket today by a long way. But more than anything, it’s just the joy he brings to viewers the world over, through a very simple act that most people do – Run.

A must-win game after an incredible start to the competition – England only had themselves to blame for their predicament. With losses to Pakistan, SriLanka and Australia, they had put themselves in a spot of no return. They had to beat India, and had to begin well. Winning the toss and batting first was crucial, but getting Roy back in the side was equally important.

The way Roy and Bairstow carried on with their jobs was workmanlike. They had a few lucky moments, but capitalised soon after. Bairstow had been pretty ineffective in the earlier games, but with Roy back as his opening partner, he suddenly felt unshackled. Roy’s free spirit with the bat actually helped Bairstow because he was now able to play his natural game without having much to worry about. His century had a lot to do with his opening partner. But Roy didn’t miss out too. He got his share of runs after being out of the team for a few games due to injury. Overall, it was superb batsmanship and one that every Indian fan equally enjoyed as well.

Now that the English look like they have got their mojo back, atleast with their top-order batting, the must-win game (again) against NewZealand should be a fabulous one to watch.

Chasing 338, what India needed was a brisk start, but England did not give that to them. The early fall of KL Rahul probably had some part in that, but majorly, it was due to strict, disciplined bowling by the English pacemen. To immediately jump in and blame Rohit and Kohli for that is very immature. We are talking about two of the world’s best batsmen here. If they cannot score runs freely, there is probably a very big reason for that. 28/1 after 10 overs wasn’t what India planned for during the break though, but what followed that was very intelligent batting. The moment these two batsmen got a feel of the wicket and the bowling, they took off. They targeted the right bowlers, in Wood and Stokes, and capitalised on every opportunity, and you could see that the runs started flowing freely.

140 required off 14 overs with Rohit and Pant at the crease, and with Hardik, Dhoni and Kedar yet to bat, you would still think that the match was evenly poised, wouldn’t you, especially with so much T-20 experience in the ranks? But what really irked every Indian fan at Edgbaston thereafter was the way India went about chasing the target. Much has been said about the ‘intent’ or the lack of it, with which the Indian middle order went about the chase. And to be in the ground constantly waiting for an ultimately futile attempt by either of the batsmen to try and win the game wasn’t the best feeling. To score just 73 runs in the last 10 overs and to eventually lose the game with 5 wickets in hand isn’t done! From a spectator’s point of view, it felt as if MSD and Kedar were not even trying to make a match out of it. Did they give up on winning the game long before everyone else saw it coming? Did the play the way they did to protect India’s NRR? My guess is as good as yours.

Much has also been said about India playing the situation to enable ‘certain’ teams to make/not make the top-4. In my opinion, that is rubbish, because there are still so many possibilities left for the teams in contention, and it is an impossible task to accomplish. Morever, it doesn’t really make a difference who you face in the semi-finals because very team brings about a stern challenge. One thing is certain though – MSD and Jadhav didn’t lose India the game, nor did the slow start. It was various factors put together, not to forget the exceptional effort by the English players with the bat, ball and on the field. But any attempt to try and understand the mindset of the Indian batsmen during the last 10 overs only leads to more questions and an ultimate sense of obscurity. Enough has been said about it everywhere and more talk would just fuel greater negativity. What we all want to see is better sportsmanship and better Cricket overall which we hope would be a constant each day, every day.

What started off as a game that the whole Cricketing world was looking forward to ended up being one that left millions of fans perplexed, confused and angry! The Cricket fan in me had an amazing experience witnessing some quality shots, yorkers and catches, but the Indian fan in me probably died a slow death yesterday. May be Cricket isn’t that simple a game after all!