You are here: Home / Australian Cricket team / Win the toss and Bat first! 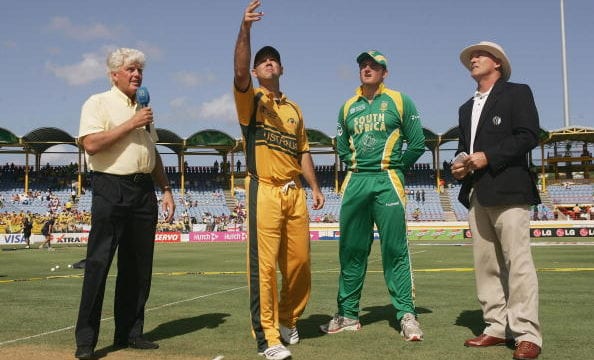 Cricket is a simple game, but more often than not, we tend to complicate it! Captains overthink, bowlers experiment and batsmen try unnecessary things. Although one could argue that the game has become better due to some degree of extravagance, Cricket still remains a simple game between bat and ball, and for the right reasons!

The common factor between all the games listed above – the team that batted first ended up as winners. The evolution of ODI Cricket has seen the use of white balls, coloured clothing, floodlight games, extreme marketing and covered pitches. But evolution has not changed one fundamental aspect of the game – the old adage of ‘Win toss, Bat first.’ It came true for SriLanka, Pakistan and India in week 3 of the competition, and reared its ugly head for WestIndies, Afghanistan and specifically England.

When you talk of a team, no matter what format of the game, you talk batting first and then bowling. That is in no way a means to demean the bowlers, but is just a general habit of analyzing a Cricket team. You pick the batsmen first and then you pick the bowlers. When test cricket is in discussion, the talk is about picking your best bowlers to get 20 wickets, but in ODI cricket, the discussion revolves around picking a team that can score you 300+ runs in an innings. So, like it or not, batting and batsmen assume more importance at least when an ODI team is picked.

So, why do teams opt for bowling on winning the toss?

That’s the beauty of the game isn’t it? So many things out of one’s control can determine what actions a captain takes on the field. Take for instance the game between England and Australia. Conditions were overcast at the beginning of the game, there was overnight rain, and the pitch looked like it had some moisture for the opening bowlers. Did this make Eoin Morgan opt to bowl first after winning the toss? Absolutely! Did he make the right call? No. It might be convenient to say that in hindsight but I truly believe that it was a terrible call because of the following reasons.

When a team chases (any total for that matter) there is always the feeling that they know what to do at every stage of the chase. You say to yourself that you already know the target, know when to accelerate, when to play it safe, which batsmen to send in when etc.  Chasing can give you the feeling that things could be kept under control. Although this is true in certain circumstances, in a pressure-cooker situation, this completely goes out of the window!

Having been inconsistent so far, England needed to beat Australia. The game against their biggest rivals was ever so important in their quest to guarantee a semifinal spot. History tells us that in such situations, it is always good to bat first, and for the right reasons. A score on the board is better than anything else. For a chasing team, a score of 220 would appear as 250 and a score of 250 would appear as 280. In the game against Australia, 285 definitely appeared as 320 for England. Playing in front of a home crowd, in a must-win game, the last thing the Poms wanted was to chase what felt like a 300+ score. Bad decision! And it cost them dearly.

2) Non-World cup history counts for nothing!

The World Cup cannot compare to any bilateral, triangular or quadrangular tournament! Not even the Champions trophy. There is a reason why it is called the ‘World’ Cup. It is a long, high-pressure tournament, played in different venues and on different pitches. Teams have got to be strong physically and mentally, and no matter the occasion, have to bring their best game each day everyday. So, what England might have achieved before the World Cup in successfully chasing numerous 300+ totals kind of counts for nothing. It would be a gross mistake to think that you could repeat the same in a must-win World Cup game. England committed that grave mistake and are facing the consequences now!

Know what you are good at and take the opportunity of exposing your strength to the biggest challenge in front of you. Isn’t that the mantra of life? Sport is nothing but life in microcosm! Why can’t it then be the mantra of a Cricket team? When a team can constantly make/chase 300+ scores, it proves one thing – that their biggest strength is Batting. Name one team in the World Cup that can confidently say that its biggest strength is bowling – None! It brings us back to one of the points discussed above that batting assumes more importance whether you like it or not! So overcast conditions, a tinge of grass on the wicket, seam bowlers in the opposition – test your biggest strength against these factors! That’s what Australia did (had to) and that’s why they posted a big score. Wouldn’t it have been more prudent for Morgan to tell his unbelievable batsmen to go see out the new ball and then to go on the attack, than to completely rely on Woakes, Wood and Archer? Why he did not do that leads us to the next point.

4) Over-complication amounts to nothing!

Complicating a rather simple situation always seems to feel good, but it tends to give a false impression of covering all bases and achieving perfection. The game is already complicated as it is. There are coaches for all specific skills and there is sometimes an over-reliance on technique. It is best to leave all this aside and keep a calm and clear head when you do the business in the middle. Overthinking what to do at the toss, and experimenting when there isn’t a need to, can have dire consequences.

Anyone that has been following the World Cup with a very keen eye would have noticed something very important – the scores that teams are putting up on board have reduced drastically since the beginning of the competition. The World Cup can do this to teams. When you are playing your first game, you are fresh, you play on flat, hard pitches, and you are fearless. No game is a knock-out and a loss doesn’t hurt as much. But as the competition progresses, the fearlessness starts to go out of the window. Pitches become softer, and the mind starts to play tricks. This results in teams producing lower scores. Week 3 of the World Cup has not produced a single 290+ total (291 once).  Has the bowling generally become better? No! It is because the batting has become more cautious.

What does all this mean now and where does this leave us?

With important games coming up for SriLanka, Pakistan, Bangladesh and England, and their fates hanging in the balance, it would be safe to say that no team would want to bow out of the competition, having committed a grave mistake. Simplicity can lead to wonders, especially at the fag end of a competition such as the World Cup. The team that commits fewer errors will end up bagging the last semi-final spot, and eventually the cup. And it all starts from the first thing that happens in a Cricket game – the Toss!

Win the toss, and bat first – it never becomes outdated.